What happens to scrap cars?

Have you ever wondered what happens when a car is scrapped? You might already have a general idea about the process due to its depiction in films and TV shows. However, there are several different steps involved to ensure a vehicle is safely scrapped and recycled. This article will explore how a scrap dealer completes the task.

If you’re wondering what happens to cars when they are scrapped, it all starts with a de-pollution process. This process is done to remove all hazardous materials from the vehicle. The car battery is typically the first item extracted. This is because the battery contains both acid and lead, two materials that are hazardous to the environment.

De-pollution also includes the removal of the car’s fuel tank and fitted airbags. These two items are dangerous for the same reason: the potential to explode. Airbags feature chemicals that can cause an explosion due to pressure, and traces of highly flammable diesel or petrol will remain in fuel tanks.

In addition, the seatbelt pretensioners, which feature pyrotechnic charges, will also be taken out of the vehicle.
Oils, fuel, anti-freeze, coolants, and all other liquids considered hazardous are then removed from the car. If these liquids are left within the vehicle and not properly dealt with, they can pollute the water supply or contaminate the soil. Furthermore, the parts that touch these fluids – such as the oil filter and catalytic converter – need to be safely detached from the car.

The start of the recycling process

The recycling process will typically start at the same time as de-pollution. This is due to the removal of the car’s tyres. This will be done early on not just because they’re relatively easy to extract, but also because the tyres need to be sent to a specialist recycling centre.

There is one problem with recycling tyres: only a restricted amount of them can be stored at a recycling centre at any one time. This is down to the fact that, if a significant portion of tyres catches on fire, they can burn at exceptionally high temperatures for days.

Along with the tyres, any salvageable car parts – aka items that can be reused – should be removed at this stage. Depending on their condition, the likes of engines, wheels, and body panels can be recycled. Instead of going through the process of scrapping these parts and turning them back into raw materials, they can be sold and installed in other vehicles.

Once de-polluted, the vehicle is safe to be crushed. Once the crushing has finished, a material classification process will be utilised to separate the car’s individual parts. This means the likes of metal, plastic, and fibre will each be isolated before being fully recycled.

The crushing can happen in two main ways. A small scrapyard, for example, will typically use their grapple or grab equipment to bash a scrap car into a flat shape. Larger ones will opt for a car baler or car press, which – as the names suggest – are specifically designed for flattening vehicles.

Large scrap car merchants will also utilise fragmentising. Fragmentisers can cost upwards of £15 million. While that figure is an eye-watering one, this processing equipment is necessary for transforming scrap cars into the ultimate scrap metal grade – which makes it a much more valuable commodity. 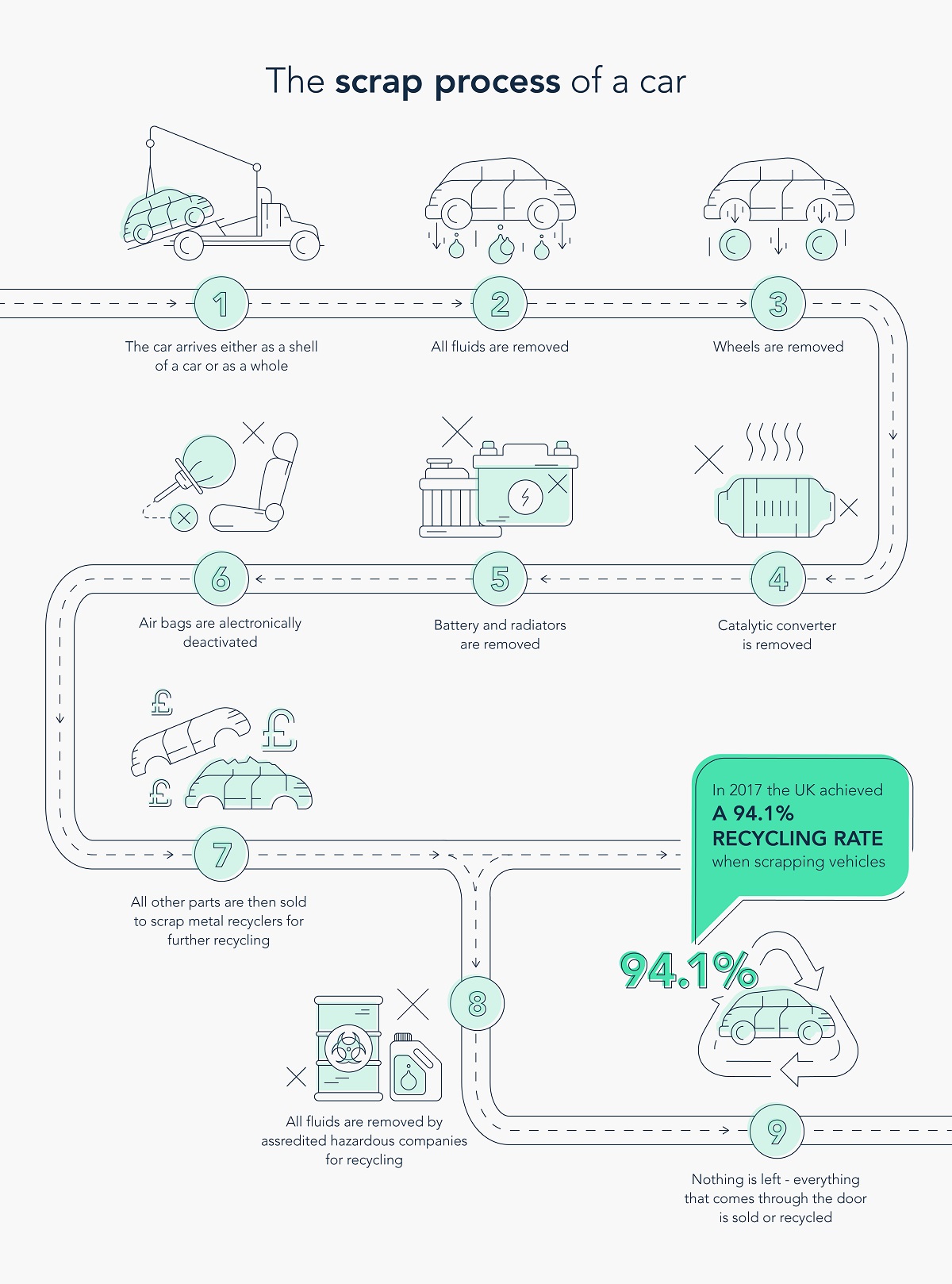 The overseas sales of scrap metal

Due to the collapse of the British steel industry, the recycled scrap metal has to find a new home. That new home is overseas in countries such as India and China.

In general, most of the recycled metal will naturally end up in these high growth countries due to supply and demand. Large vessels will be loaded up with tens of thousands of tonnes of the metal, shipped from British ports directly to those destinations that can make use of the materials.

With the volume involved, it shouldn’t come as a surprise that scrap metal is, by weight, one of the UK’s biggest exports.
How recycling is helping business and the environment

The big answer to ‘What happens to scrap cars’ is simple: they are assisting with revolutionising the business and recycling industries.

Remember that recycled scrap metal that is being sent over to India and China. They are both using this to manufacture a significant amount of new products. In fact, there’s every chance your old scrap car could be repurposed into a new vehicle.

In terms of helping the environment, scrapped cars create a bigger positive impact than you could possibly envisage. Recycling steel alone helps to massively save energy and natural resources. The following statistics help to illustrate just how much the environment is supported: 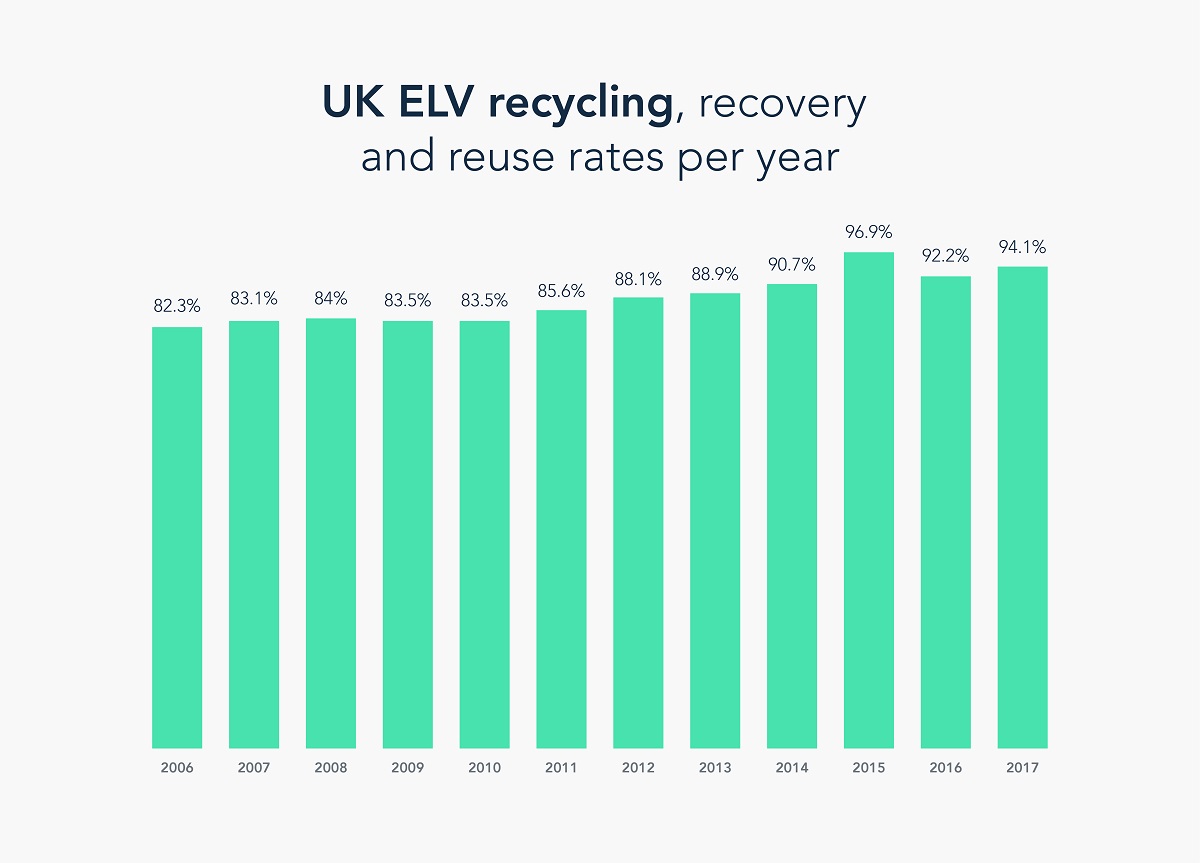 While recycling scrap cars is a global project, the UK plays a large part as already established. It is also one of the most efficient vehicle recyclers in Europe, with 2015 statistics highlighting how it recycles, recovers, and reuses nearly 97% of a car on average – a number that has continually grown over the past decade.